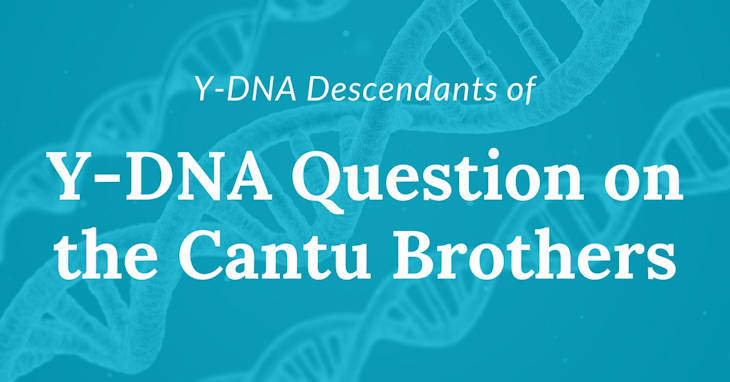 Crispin Rendon's research has brought about a Y-DNA Question on the Cantu Brothers Joseph and Geronimo Cantu . It is unknown whom their father was, but it is common knowledge that all Cantu's come from the same two brothers.

But where does this information come from, what records mention it? I've seen this information in many books but none mentions the source. I myself area descendant of Geronimo Cantu, he is my 9th great grandfather.

Now, below you will find the Y-DNA descendant report of "Unknown Cantu" whom had three boys Fray Lorenzo Cantu, Captain Geronimo Cantu, and Captain Joseph Cantu that was prepared by Crispin Rendon.

Only Geronimo and Joseph are known to have had descendants and they lived during the very late 1500's and the middle part of the 1600's.

This report by Crispin Rendon is an attempt to document or discover the Y-DNA of the Cantu Brothers. Presently as Crispin mentions there are two lineages and both have different Y-DNA. The reasons can vary but more male descendants need to test and contact Crispin.

So if you are a Cantu male and can trace your line back to any of these two brothers, with documentation please contact Crispin Rendon.

Introduction of Report by Crispin Rendon

This is what Crispin say about this report. Fact or Fiction: The Cantu from Northeastern Mexico mostly descend from brothers Geronimo and Joseph Cantu. That has been my understanding for over 20 years. Genetic genealogy results have left me wondering if I have had it wrong.

Y-DNA test results for Robert Louis and John Carlos Cantu, who both descend from Geronimo Cantu, do not match those of Gene Cantu, Oscar Cantu and Michael John Cantu who descend from Joseph Cantu. If Geronimo and Joseph Cantu are brothers then their Y-DNA would match.

Back to the issue of genetic testing.

Get A Copy of the Report, Y-DNA Descendants Unknown Cantu

Make sure to get your own copy of this report today, since you never know. One day he may end up being your ancestor or of someone you may be doing research on for someone else.

The We Are Cousins DNA Project

To read, learn, or get more reports similar to this one by Cripin Rendon please visit the We Are Cousins DNA project page. Here is the link: https://www.wearecousins.info/dna/

Don’t forget to download your very own copy of this report. Have fun!