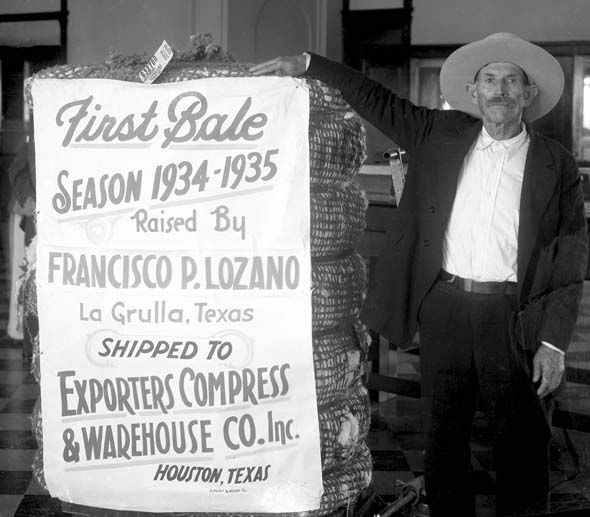 Facebook recently turned up another gem. This time it was on my wife’s side. A photo of her great grandfather was posted on the Facebook Group for La Grulla Texas. It is the photo above and as you can see it is just not a picture of him but a photo that ties him to local history and also Texas history. He raised the first cotton bale for the season of 1934 – 1935 and it was shipped to Exporters Compress and Warehouse Co. Inc. in Houston Texas.

As I mentioned the image was posted on La Grulla’s Facebook Group page and it had the following message:

Further down in the comments this was mentioned:

“This is what Joel Garza wrote with this picture:VINTAGE HISTORY OF LA GRULLA, TEXAS
This photo appeared in a recent story about life in Houston, Texas in the 1900’s. It caught my eye when I saw La Grulla, Texas on the poster. It is fascinating that the first bale of cotton in season 1934-1935 came from Starr County and raised by Mr. Francisco P. Lozano. The photo is part of a historical collection at the Sloane Gallery in Houston!!!”

I want to thank Jimmy Martinez for maintaining the Facebook group page along with Benito Saenz, you guys are doing a great job helping bring current and past events to light. Also thanks to Mr. Joel Garza for sharing this image with everyone.

As I mention in my book “Mexican Genealogy Research Online: A Guide to Help You Discover Your Ancestry” Make sure to follow the facebook pages of the towns and cities were your ancestors were from. This is the fourth image I obtain about our ancestors through facebook.

Something that is interesting about the above image is that he is listed with his maiden name and his fathers last name is abbreviated with P. His full name was Francisco Perez Lozano. On hsi death certificate he was also listed as Francisco P. Lozano. The point I am trying to make is that you should also always search for your ancestors using their maiden name.

Here are other blog posts related to Francisco Perez Lozano:

Let me know in the comments section if you have had similar outcomes of pages that you may be following on Facebook.