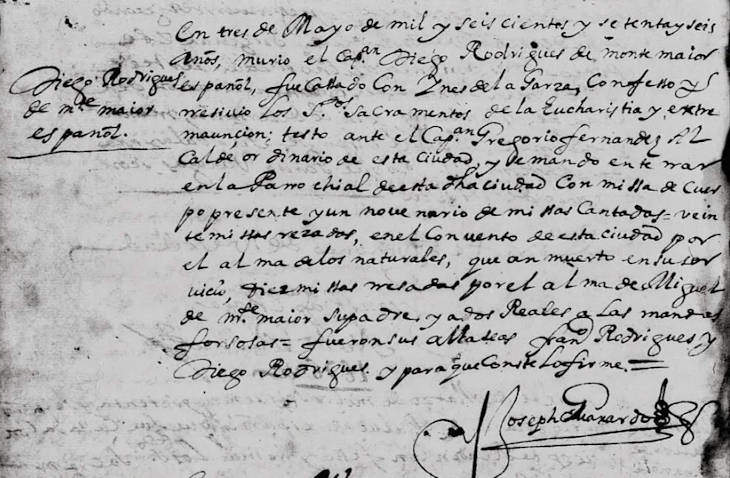 The following is the 1676 Church Death Record, transcription, and English translation for my 8th great grandfather Diego Rodriguez de Montemayor. He was married to Ines de la Garza. This document indicates that he was buried in Monterrey, Nuevo Leon, Mexico. It also indicates that his father was Miguel de Montemayor. His son Francisco my 7th great grandfather is also listed as an “albecea” which means as one of the executors of his will. I have yet to find his will. He is also the great-grandson of Diego de Montemayor.

Transcript of the above image:

English Translation of Above transcript:

On May 3 of one thousand and six hundred and seventy-six years, died Capan. Diego Rodriguez de Montemaior Spanish, whom was married With Ynes de la Garza, He confessed and received the Holy Sacraments of the eucharist and Extreme Unction; made a will before the Captain. Gregorio Fernandez ordinary Mayor of this city and commanded to be buried in the Parrochial of this city with mass with present body and ninety sung masses = twenty prayed masses, in the Convent of this city for the souls of the natives, who died in his convielo, Ten prayed Masses for the soul of Miguel de Mte.maior his father , and two Reales to the mothers forsosas = his executors were Franco. Rodriguez and Diego Rodriguez. and to make it known I sign. =

I know that the above translation has errors but I did the best I could. Also, there are some words that I have no idea what they mean so I just left them alone.