This is a map that I recently found about my 10th great grandfather’s, Alonso de Leon, last expedition into Texas. He died the following year on March 21, 1691 in Montemorelos Nuevo Leon, Mexico.

I found the map at the Portal to Texas History website.

Here is their description of the map:

Here is the Map: 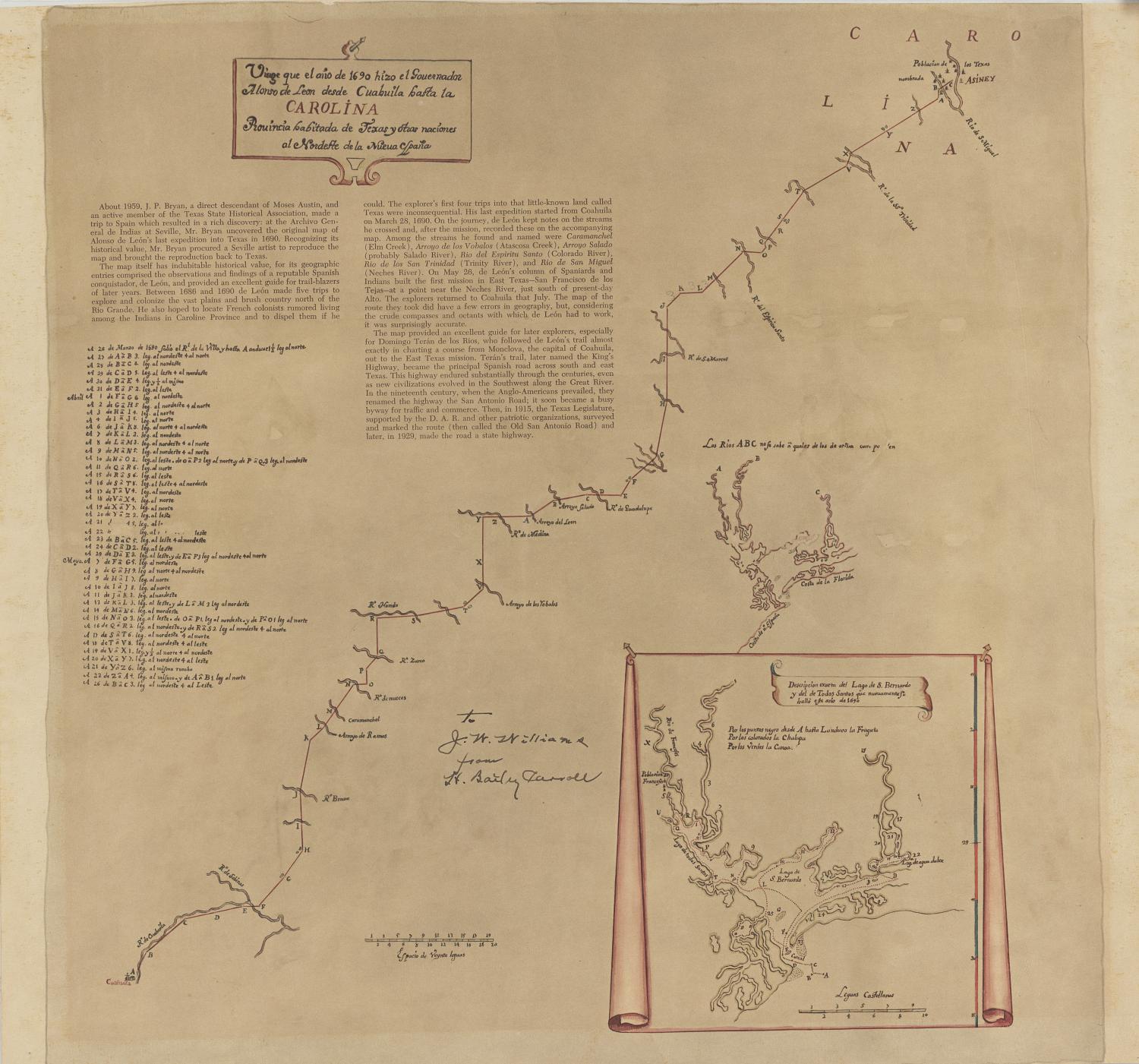 Click here or on Image to see High Resolution Copy

Here is the inscription on the map for easy reading.

“About 1959. J. P. Bryan, a direct descendant of Moses Austin, and an active member of the Texas State Historical Association, made a trip to Spain which resulted in a rich discovery: at the Archivo General de Indias at Seville, Mr. Bryan uncovered the original map of ALonso de Leon’s last expedition into Texas in 1690. Recognizing its historical value, Mr. Bryan procured a Seville artist to reproduce the map and brought the reproduction back to Texas.

The Map itself has indubitable historical value, for its geographic entries comprised the observations and findings of a reputable Spanish conquistador, de Leon, and provided and excellent guide for trail-blazers of later years. Between 1686 and 1690 de Leon made five trips to explore and colonize the vast plains and brush country north of the Rio Grande. He also hoped to locate French colonists rumored living among the Indians in Caroline Province and to dispel them if he could. The Explorer’s first four trips into that little-known land called Texas were inconsequential. His last expedition started from Coahuila on March 28, 1890. On the journey, de Leon kept notes on the streams he crossed and, after the mission, recorded these on the accompanying map. Among the streams he found and named were Caramanchel (elm Creek), Arroyo de los Valobalos (Atascosa Creek), Arroyo Salado (probably Salado River), Rio del Espiritu Santo (Colorado River), Rio de los San Trinidad (Trinity River), and Rio de San Miguel (Neches River). On May 26, de Leon’s column of Spaniards and Indians built the first mission in East Texas-San Francisco de los Tejas-at a point near the Neches River, just south of present-day Alto. The Explorers returned to Coahuila that July. The map of the route they took did have a few errors in geography, but, considering the crude compasses and octants with which de Leon had to work, it was surprisingly accurate.

The map provided and excellent guide for later explorers, especially for Domingo Teran de los Rios, who followed de Leon’s trail almost exactly in charting a course from Monclova, the capital of Coahuila, out to the East Texas mission. Teran’s trail, later named the King’s Highway, became the principal Spanish road across south and east Texas. This highway endured substantially through the centuries, even as new civilizations evolved in the Southwest along the Great River. Int he nineteenth century, when the anglo-Americans prevailed, they renamed the highway the San Antonio Road: it soon became a busy byway for traffic and commerce. Then, in 1915, the Texas Legislature, supported by the D. A. R. and other patriotic organizations, surveyed and marked the route (then called the Old San Antonio Road) and later, in 1929, made the road a state highway.”

I hope that you enjoyed this post. Let me know what you think about it in the comments section of this post.