While searching for a book at the University of Texas Pan American I came across this one titled “Dolores, Revilla, and Laredo – (Three Sister Settlements)” by Rogelia O. Garcia. It is a 51 page book that is very interesting. Especially if you have traced your ancestors to any of these three settlements as I have done for Revilla.

“This small volume is the outgrowth of several years of research and is intended to commemorate the saga of the great and noble men and women who settled in the vast wilderness along the Rio Grande and left us a great heritage, their culture and ideals. The men of Dolores and Revilla were men of very liberal ideas, while those of San Augustin de Laredo were conservative. Their descendants are proud of them.” – Rogelia O. Garcia

The author also mentions that most of the information that you will find in this book comes form the; 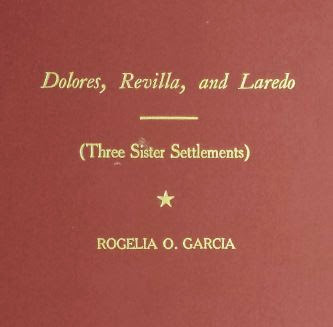 THE CONFEDERACY ALONG THE RlO GRANDE

I found several of my ancestors within the pages of this book. I highly recommend that you check it out. It is available at: